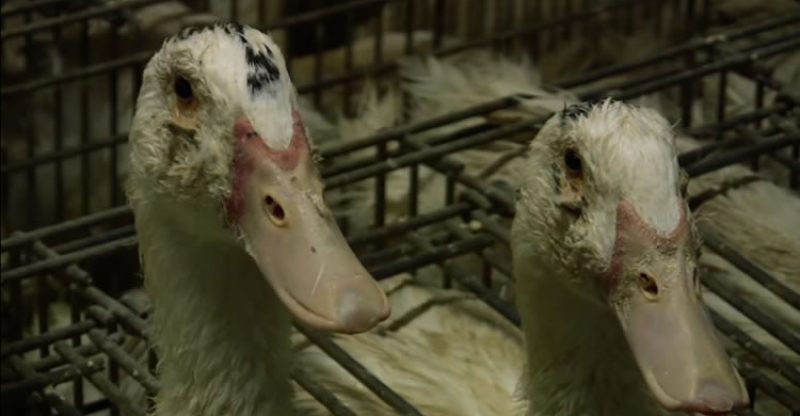 Ok fine…I’ll admit it, I used to love foir gras.

This was one of my favorite dish whenever I ate at a French cuisine. The melt in the mouth texture from the fatty liver, full of silky smooth richness, surrounding each and every bite with exquisitely elegant, buttery and heavenly flavors.

I loved my foir gras, seared, they’re just the absolute best…although quite expensive.

They can also be made into a mousse, a parfait, or served as a pate to spread on toasts.

Yes, I’ve tasted it all and I bloody loved it!

When cooked to perfection….oh boy, it can only be described as….a delicacy from another dimension! If I’m even more honest, nothing else in this world can compare. 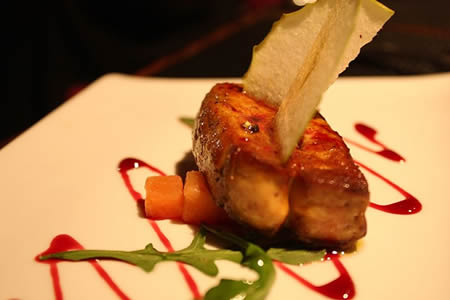 There, I said it!

But if only I knew what really goes on behind the scene to have such exquisiteness put on my plate. I’ll probably vomit.

Yes and you’ll probably vomit with me, once you find out the way these animal’s been treated and suffered in order to produce such fine indulgence.

What Is Foir Gras and How It’s Made?

By expanding and fattening the animal’s liver, farmers can turn it into a luxury food item and sell it at a much higher price.

Seriously, no matter how much I love eating animals, their meat, flesh, organs, or whatever…

Seeing them getting treated like this and not given a chance to “at least” enjoy their natural way of eating…or basic swallowing, is just completely wrong and inhuman!

Come on man….eating is like the best part of being alive!

Just watch the video below and tell me what you think.

Now I understand this is probably the worst example out of all the foir gras farms in the world. In fact, there is this one particular farm in America who produce these abnormally large livers ethically or so they claimed.

But then…that is only the BEST EXAMPLE! (Good on them by the way…or not)

I would, however, really hate to see how the average foir gras farm operate.

Regardless, shoving a pipe down someone’s throat, whether it’s made of metal or plastic, just leaves a bitter taste in my mouth. Forced feeding is forced feeding, no matter which way you look at it.

Can you imagine someone shoving a whole box of dry corn flakes down your throat…with no milk?

Ducks know if they are being abused and they have gag reflexes too!

Now I don’t want to go through the specific details as to how foie gras are produced.

In brief, it basically involves forcing 4 pounds of grains and FAT into a male duck’s or a goose’s throat, in order to fatten and enlarge the liver.

This process goes on everyday for I don’t know how long, but it won’t stop until the animal’s liver reaches up to 10 times of its normal liver size. You can learn more about it HERE.

As far as I know, the following countries have already participated in either banning the production, importation or sale of foie gras:

I would really like to see more countries join in and ban this practice once and for all, but I also understand that humans can be very ambitious when it comes to eating good food…especially luxury food.

But that’s another story which I’m not interested in… 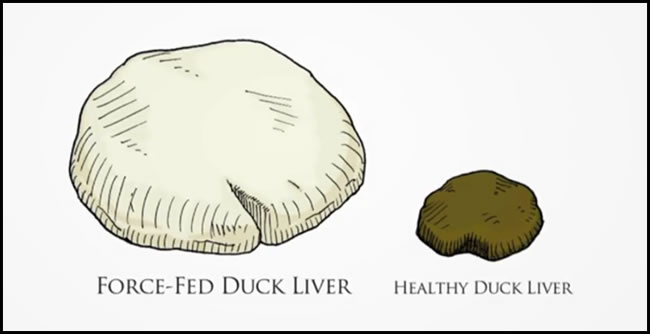 PETA / Youtube
As you already know, foie gras is an unnatural fatty liver that’s produced via a “gavage” process (forced fed) and then sold according to it’s market sale price.

Liver pate on the other hand, is a natural and normal sized liver, cooked and then ground into a rich thick paste. Both duck and chicken livers can be used to make a pate.

Now I have no problem replacing foie gras with any normal liver pate, duck or chicken.

While it may not taste the same, but trust me. If you prepare and cook it correctly using other tasty oil such as butter or duck fat, it can also be turned into a delightful delicate dish.

In terms of liver pate, at least I know that the animals didn’t suffer too much before turning into our food. As for the unethical process of “you know what”, I have decided to boycott and stop eating it altogether.

I’ll try to make some delicious liver pate recipes (using normal duck or chicken liver) in the near future, so if you’re interested to find out how, then please stay tune.

As for all the vegans and vegetarians out there who may be reading this article. I just wanted to quickly say that while you guys have my utmost respect (HONESTLY!), but please do not attempt to convert me into one.

I’m a meat lover, an animal eater and forever will be, just like most humans who have been eating fish, pigs, beef and so on for thousands of years. I truly enjoy it.

And for the record, I love eating vegetables too!

I just don’t like seeing animals getting treated the way such as the ones shown in the video.

If I know other companies or farms who are doing this, not just for foie gras, but with other food products such as meat cuts, eggs etc. I’ll seriously consider boycotting their brands too.

So that’s it…I made my point.

Whether you should stop eating it, I’ll let you decide. 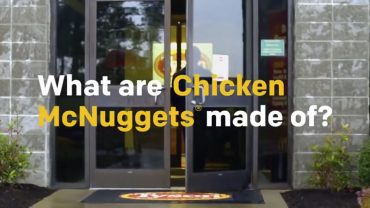