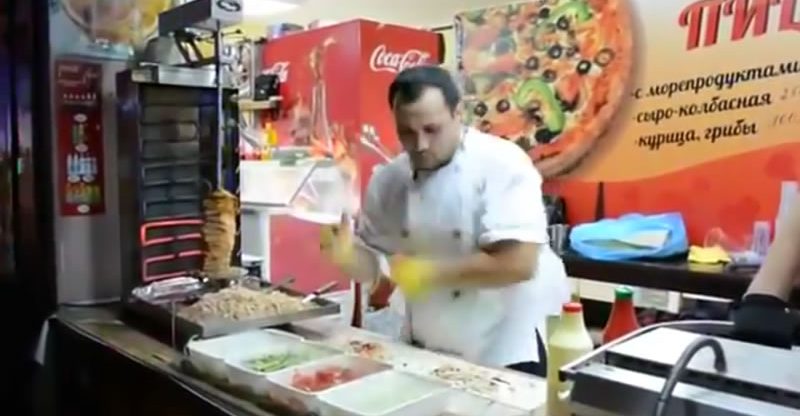 I don’t know about the fastest since there are so many hidden talents in this world. But this guy surely has to be the most entertaining kebab maker I have ever seen in my life!

Seriously, I couldn’t stop laughing when I first saw this and it has nothing to do with the fact that he’s Russian.

No offence, I was simply amazed by his quick and precise movement so I couldn’t control my amusement.

By the way, do they even make kebabs in Russia?

You see in Australia, there are many kebab shops and you can find one in literally every suburb, town or city. That’s because Australia is a multicultural country with many migrants from the middle east.

So I always thought that kebab is a traditional Lebanon food, since most of those chefs (if that’s what you call them) are Lebanese. But after doing some research online, I found out that it actually originated from Iran (I was close though…)

So for a Russian cook to prepare a kebab roll in such style is truly impressive.

Did you see that?

The guy is a true master in making kebabs! He basically danced his way throughout the whole thing and before you know it, 2 awesome kebabs were ready.

Anyhow, good show doesn’t always mean good food. While his performance certainly did his business no harm. At the end of the day, this amazing talent will be wasted if the kebab he’s served tasted like crap.

One thing I can be sure though…

And that is…I will never want to pick a fight with this kebab chef.

I mean, just look at the way he plays with that massive knife while waiting for the toaster to finish its job!

I think that’s actually a machete now that I watched the whole video again.

Seriously, would you want to go anywhere near him? 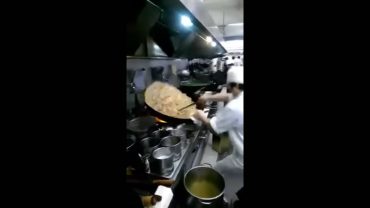